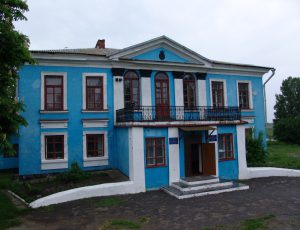 Sixteen kilometers to the west from Khmelnitskiy there is a big village of Chorniy Ostriv which had a castle in 14th century. In the late 15th century the settlement received its name as Chorniy Ostriv and in 1556 Magdeburg rights were granted to it. Different families of magnates owned this town during several centuries. They were the Novodvorskies, the Svirches, the Ostrozhskies.

In the mid 18th century the Pshezdetskies started to develop this town and achieved a great success in it. They didn’t rebuilt the castle which had been destroyed during Cosacs’ wars but altered a plan of streets, found a place for a large market square and built a town hall in the middle of it. They built Transfiguration church closer to the river in 1799. It was a tall round church decorated with two pairs of pilasters at the west facade and a triangular fronton. At the beginning of 19th century they built a huge cathedral of the Virgin Assumption. All the monuments of the past like town hall, church and cathedral have still stood on their places.

The main expenses, though, were spent on building of their own palace which later became a famous artistic and cultural-educational center of Podillya and Volin. Great collections of books, paintings and sculptures were started by Mikhailo Pshezdetskiy (1782 – 1799) who was the last scribe of Great Lithuanian Principality (this post is as important as the prime minister nowadays). The most famous period of the palace was in the years when Costyantin Pshezdetskiy ( 1782-1856) was a marshal of the district and province nobility. He broadened the art gallery, founded a College of the Nobility, offered job to Italian artist Matei Bochelli to decorate the cathedral and teach art, supported the orchestra conducted by Luidji Tonini. In 1847 Pshezdetskiy invited to Chorniy Ostriv one of the best pianists and composers of those times Ferenc Liszt. Maestro highly appreciated the qualification of local musicians and often played with them. He wrote there in Chorniy Ostriv his second Hungarian Rhapsody.

Some more well-known people visited or worked in Chorniy Ostriv under the patronage of the Pshezdetskies. Thus, an artist Napoleon Orda spent six weeks and made five sketches of the mansion. One of the last works of famous landscape designer Dennis McClair was the reconstruction of the park in Chorniy Ostriv where he realized his new idea to combine water and old trees.

Leonid Hlibov, a famous Ukrainian writer of fables, worked as a teacher in the College of the Nobility and taught Geography and History. He also wrote few of his fables and poems there.

Costyantin Pshezdetskiy was not only the admirer of art, he was also a successful politician. He served till the title of a secret adviser and in 1844 he gained the title of a count and received it from the emperor Nickolay I.

His sons were worthy descendants of the family. Elder son Alexander became a well-known author and historian. Younger son Karol became an officer and translator. Some time later he settled down in Chorniy Ostriv and married beautiful Elzhbetta. Karol with his wife and two daughters often stayed in Rome. There, in that city their daughter Laura tragically died after she had fallen down from the horse. She was buried in a family vault of the cathedral in Chorniy Ostriv. After that her parents gave Brodskiy Viktor, an academic of St.Petersburg’s Academy of Art, the order to make a headstone for her grave. He made an amazing sculpture of a charming sleeping girl from white marble.

During the soviet period the palace was reformed into school, the cathedral became a house of culture and the church became a storehouse. Pieces of art and the library disappeared from the palace. Laura’s sculpture was conveyed to Kamyanets-Podilskiy in 1938 and now you can see it in the cathedral of Petro and Pavlo.

Rebirth of temples happened in 1990s. The palace gave the place to local musical school and a museum. There is a monument to Hlibov L. ,built in 1991, not far from the former mansion of the Pshezdetskies at the new school. You can also find some of former buildings of housing, college, mill and a mansion on the Wolves’ Hill.