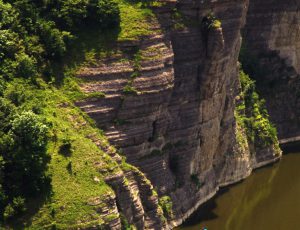 The most well-known ancient palaeolythic settlement of hunters was found near the village of Vrublivtsy, Kamyanets-Podilskiy district which is about 300 000 years old. In the era of middle and late palaeolyth primary hunters started settling the territory of modern Podillya.

The picturesque village is famous for its fabulous folk traditions to celebrate Ivan Kupala’s Day and Water Christening when people gather near baths carved in rocks which are always filled with water of healing streams. They say that Antoniy Pecherskiy preached there and sanctified this water.

On the river you can see people on rafts and canoes. Rafting has become very popular activity among tourists and tour operators.