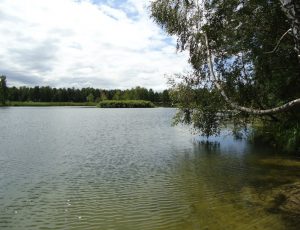 “Male (Small) Polissya” national wild life park occupies 8762,7 hectares and it is situated on the territory of Izyaslav and Slavuta districts.

It is the land of picturesque lakes, green pine forests, swamps. It has a variety of flora and fauna. The Horin is the biggest river of the park. The Hniliy Rig is one more river on the park territory with its many tributaries. There is Lake Svyate in the park and it is of natural origin unlike chain of artificial lakes called Goluby (Blue) Lakes. Marshes around these lakes are unique because of the sphagnum formations.

The park is rich in such trees as pine, spruce, birch, alder and its special feature is moss which covers 70-80% of the park heightened sections. Variety of plants and flowers can also impress. Some species are registered in the Red Book of Ukraine and some are relict vegetation.

Plant life of “Male (Small) Polissya” wildlife park is represented by 700 species of vascular plants, fifteen of them are registered in the Red Book of Ukraine and thirty five ones are under special protection on the territory of the region.

Group of birds is the most numerous in the park. They are represented by chaffinches, pipits, tits, woodpeckers, cuckoos, jays and others. You can also meet raptorial birds like buzzards, hobbies, ravens and hoopoes. Some species live on the water. They are drakes, grey herons, black-headed gulls and dabchicks.

“Male(Small) Polissya” national wildlife park consists of 11 territories and objects of nature reserve areas of Khmelnitskiy region with total area of 2217,8 hectares which is 25% of the total park area.

LAKE SVYATE( HOLY) is a complex of nature of the state importance. Its territory occupies 8,2 hectares.

The lake itself has the area of 4 hectares and it was formed after antique ice formation. This territory was flooded by melting of glaciers which moved through Volin forest elevated plain and Podillya highlands. Sphagnum formations, which are distinctive for marshes of Karelia and Northen Belarus, were grown on the lakeshores and around the island.

Sphagnum formations are grown from the roots of marsh plants and covered by sphagnum moss.

The lake is surrounded by the forest.  A wide variety of wild animals is represented by roebucks, squirrels, moles, foxes and forest martens. Muskrats live in holes at the lakeshore.

Locals tell that many years ago there lived monks on the miracle island in the middle of the lake and they built a wooden church. They felt wonderworking power there which could heal the soul and body. That church had a short history; it was flooded by big water. And now they say that if you dive at midnight to the bottom of the lake you can here the bell ringing which save these waters from evil spirits. The water in the lake is special, soft, herb-and-weed-infused. That is why it is called “Lake Svyate (Holy)”. A lot of religious people come to this place in the hope to heal their souls.

MIKHELSKIY NATURE RESERVE is a hydrological natural reserve of the state importance with total area of 109 hectares.

It is a unique for Ukraine peat-bog, round in shape and grown over karstic lake. Peat-bogs like this one is typical for northern part of a taiga zone and Baltic countries but they are very rarely found in Ukraine.

Plant life and wildlife is typical for marshes.