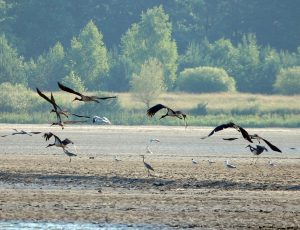 The territory of “Malyovanka” is crossed by several rivers which belong to the river basins of the Horin, the Sluch and the Khomora (the Dnipro basin). In the dells of the rivers there is a large territory of marshes.

Northern part of the park has mostly oak and pine forests and both eastern and south-eastern parts have broad-leaved trees. Oak forests also grow on the height. Hornbeam-oak forests occupy a very small territory. Pine and pine-birch forests grow in the north around the lakes.

Meadows occupy most of the areas in the north-western part of the park between the villages of Malyovanka and Savichy and in the south near the village of Polyana.

Marshes in the park are extraordinary because of their flora with unique sphagnum formations. Twenty one plants which grow in the park are in the list of Red Book of Ukraine and nine of them belong to the forest orchids.

Varieties of plants that grow on marshes and around them determine the diversity of insects, birds and plants.

A lot of tourists visit this area to find a peaceful and calm spot to escape from hustle and bustle of big cities and enjoy the nature. Lake Gliboke (Deep) is one of the largest in the park and there you can find cranberries on the marshes around it as well as on the Cranberries’ marsh.

LAKE KNYAZHE is a hydrological wildlife area of local importance which occupies the territory of 75,8 hectares and situated between the villages of Kolomye and Krupets in Slavuta district in water meadows of the Horin river.

The whole area consists of peaty marshes, water meadows, swamps, ponds and a former huge lake which is overgrown with reed and sedge.

The starting point of the landscape is Lake Knyazhe which was the main embellishment of the residence of Chetvertinskiy, the prince and Kaminskiy, a landlord in 19th century.

The lake is quite deep with clear and very cold water. It is constantly refilled with waters of numerous healing springs. Flora around the lake is typical for the landscape but some unusual types of sedge and fern are represented here. There are also plants which are registered in the Red Book of Ukraine.

Marshy meadows are the habitat for aquatic birds and numerous insects.