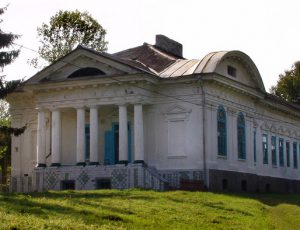 This picturesque mansion was built in the second decade of 19th century by Severin Bukar. He was a famous Polish author of memoirs and a participant of the liberation movement under the leadership of Kostyushko in 1792. It is supposed that the landscape park around the palace was laid out by a landscape designer of 19th century Dennis McClair. Nowadays it is a local school and there is only a little part of the former huge park around it.