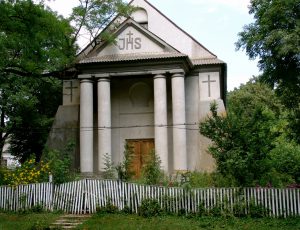 There is a grand Holly Trinity Cathedral in Novosilka, Derazhnya district. It has the history of more than two centuries. Its walls, built in stone, are supported by counter forts. The front entrance door has a portico with four pillars and a triangular fronton above. All these architectural features give the building majestic and powerful look and they make the cathedral a very sophisticated example of a catholic temple.

The cathedral was built in 1797-1798 by Kitskiy who was a local landlord and the waywode. Historic documents provide a little background about this person. He was a very good owner of the estate in the late 18th and early 19th centuries and he started total transformational change of the village. He built the cathedral, displaced a wooden church and laid the foundation of the palace. Kitskiy ruled the roost in Novosilka not for a long time, though. He died in the early 1800s and was buried in the crypt inside the cathedral. There were some more owners after him but the villagers have in mind only Kitskiy for his good actings.

In 1930s soviets closed the cathedral and allowed to use the building as a storage. In the mid 1990s the divine service was renewed.