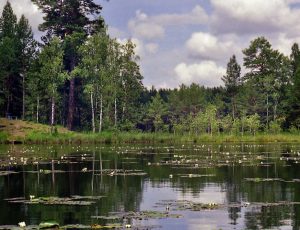 To the north of Izyaslav in the Mikhlya’s forestry there is Svyate (Holy) Lake which admires people with its incredible beauty. It usually raises in someone’s memory from time to time who has visited this place at least once. The lake is neither large nor deep and it has a small island in the middle. Scientists still don’t have any common idea according to its origin. There are few theories and one of them insists on its volcanic origin. The other one claims that it was formed after meteoritic fall. There is also a legend which says that once there was a settlement which disappeared underground overnight. To add more, both volcano and meteorite could destroy people’s houses in no time. According to the legend you can hear the church bells ringing in calm weather and see the church silhouette in the dark lake depth. Even though you can’t see the fairy vision or hear the bell ringing you can experience pristine nature with all its mighty beauty of Volin and see rare forest plants with your own eyes.