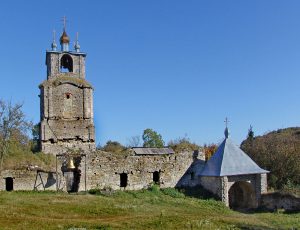 On the way to health resorts turn right into the village of Slobidka-Satanivska to visit carved in caves monks cells and see unique wall paintings which show a great fire with bolsheviks’ leaders Stalin, Lenin and Krupska burning in it in your own eyes. Historians claim that in 981 Volodimir the Great visited this religious house even though he was a pagan at that time. Later some famous people like Peter the Great and Russian commander Alexander Suvorov also visited this place.

You can start your sightseeing from monk cells which are hidden in the hill behind Holy Trinity Church. Church stories claim that in 938 a student of Kyrylo and Methodius settled there after his travel from Athos to Podillya to start a Christian church in surrounding of great pagan cultural centers. One of the cells is called “a cell of heroic deeds” and has a stone with a magic power which can make your dreams come true as soon as you touch it.

In 16th century a monastery was built above the cells and a hundred years later it became a shelter to catholic observances of Carmelites and Brazilians. Then it was the beggars’ place, the only in Ukraine. That is why the village near the monastery was called Beggars’ village.

Today there are only ruins of Holy Trinity Monastery bell tower, few cells, church and the entrance gate. The bell tower has remains of fresco paintings and bas-relief which shows a gospel storiation.