In the upper course of the Ikopot river 27 km to the north of Starokostyantiniv there is a village of Antoniny. It is very interesting because of its ancient buildings which still exist since late centuries when the village was the settlement of the Pototskies family.

The beginning of the settlement foundation in Antininy was very romantic. In 1760s princess Barbara Sangushko gave a village of Golodky(or Holodky) as a wedding present to her sister Antonina. The sister and her husband, who was a regent of King’s chancery, liked the picturesque village very much and they decided to build a palace there and lay out a park near it. Their ideas were realized and the park became one of the most beautiful places in Volin. This romantic country estate was named after Malchevsky’s beloved wife Antonina. A little later the name of the village was also changed from simple Golodky into Antoniny.

Alas, but the couple didn’t have the chance to enjoy the charm of the park for a long time, in the end of the 18th century Antonina died and Ignatiy left the palace in his grief. The palace and the village again returned back to the possession of the Sangushkoes. One of them Evstaphiy, in 1803 made Antoniny his summer residence. He reconstructed the palace, made the park wider and built greenhouses. The country estate had the best prosperity, though, while being the new possession of the Pototskies. It happened after the wedding of Evstaphiy’s granddaughter princess Maria with count Alfred Pototskiy (1817-1889). The next and the last owner of the palace was their son Yuzeph Pototskiy (1862-1922).

A tremendous reconstruction of the mansion was started in 1879. French architect Francois Arveuf and German landscape architect Kaiser were invited to Antoniny. Few buildings were added to the palace. They were a wing, a specious riding house and living quarters for servants. Two entrance gates and a forged fence were the foiling of the place. All the buildings of this architectural complex were in a baroque style. The creator of the park also carried out a huge amount of work: he added some new kinds of trees, laid out new paths and dug small pools. 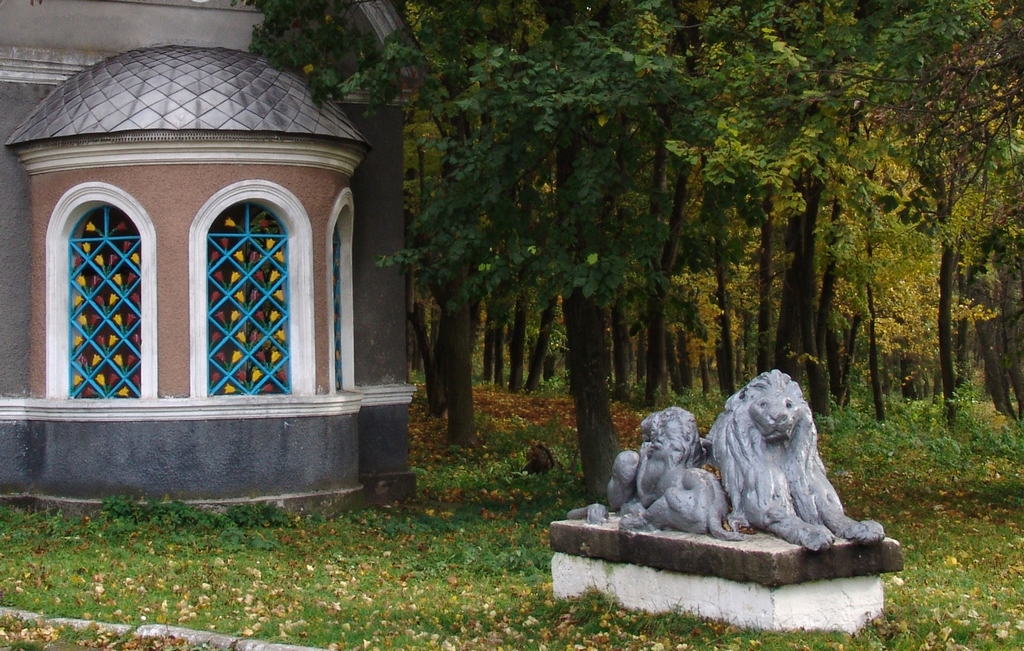 In the early 20th century Yuzeph Pototskiy partly reconstructed the palace. He added an arch to the entrance gate, rebuilt the interior which should have had different aims for their owner.

Apart from an elegant building of the garage which is now the place for local administration, Antoniny still has some old buildings which were for housing and some for administrative purposes in those old days. These were country houses for the main administrator of the mansion, a steward, an agriculturist, a stableman, a mechanic, a vet etc. They were built using different complicated combination of forms with small towers, wind-vanes, balconies, high roofs made of bricks, metal, wood, stucco and others.

You can only see the old pictures of the count’s palace. In revolutionary 1919 the palace was totally burned out and taken to bricks.