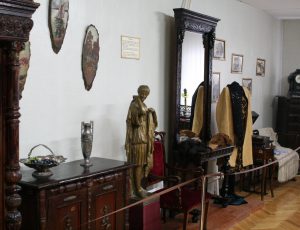 The history of the museum at 12, Podilska Street started in 1929 when it became the first one of its kind in old Proskuriv. It received status “regional” when Proskuriv became a regional center before the war in 1941. The museum had changed its place several times until it moved to Podilska Street and it is still there. Despite the fact that the museum is not big in size it has a lot of exhibits in its funds and tries to display as many artifacts as possible. There are about 80 thousand exhibits altogether.

Seven halls present history and nature of our region. Some unique exhibitions display jewellery of Kiyivan Russ and one of the biggest collections of weapons in Ukraine. Young visitors like “Native nature” hall with its wigwam where it is allowed to sit inside. The ethnographical hall presents items of old furniture and clothing. The museum has recently started the project “The exhibit of a month” which has the idea to show one of the rarest artifacts and to present its history to the visitors.

The newest and the most dramatic exhibition is devoted to the war in the East of Ukraine and it has personal objects of the participants. There is also a legend that the museum has two ghosts whose steps are sometimes heard in the basement with the funds of the museum.