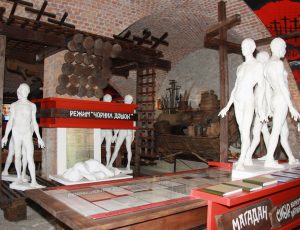 The museum is a part of a historic-cultural reserve “MEDZHIBIZH” and is the youngest of the museums devoted to the memory of Holodomor victims in Ukraine. The number of Holodomor victims in Ukraine is impressive. Different sources give different numbers. Some claim that there were about 5 million victims, the others confirm the amount of 7 million. The museum exhibition maintains the number of 10 million.You can be impressed by the notes of holodomor witnesses, their primitive tools and utensils. Mournful shadows of late exhausted people can be seen everywhere in the museum and they appeal with their horror only to the God not anyone else. Sheaves of wheat nearby symbolize their belief in better life.

Ukrainian artist Mykola Mazur created unforgettable images in each exposition of the museum so that they not only grab our attention but make us think about the sense of our lives. There are only few holodomor witnesses left alive and that is why this museum becomes much more important for everyone to remember about this fact in Ukrainian history and prevent modern politicians from commiting such crimes paying more attention to people’s lives.