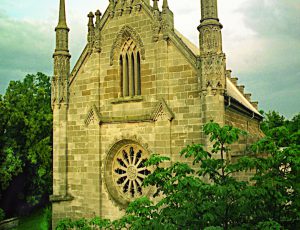 It is a village next to Maliyivtsy. Its name was mentioned in historic documents in the early 15th century. History and events had changed the owners of this village many times. Among the people who had the village of Mukariv as their possession were Caroline Godzskca, a wife of a famous adventurer, prince Charles de Nassau- Siegen and Pavlo Butyagin, a secretary of Russian Embassy in France, who owned Mukariv for twelve years. Later, after 1830 Mukariv was given to Kamyanets-Podilskiy metropolitan cathedral.

Pidlisniy Mukariv is also famous for its special neo-gothic Holy Joseph Hostage cathedral laid out of stones in 1859-72 by costs of congregation and at the instigation of Basil Shakh, the priest. In 1886 Lyubovitsliy, the bishop dedicated a temple to God. In the early 20th century there were more than 400 parishioners. In 1933 the cathedral was closed but in 1941 it was opened again. In 1962 the sacred building was closed once more and only in 1989 the cathedral was returned to faithful.