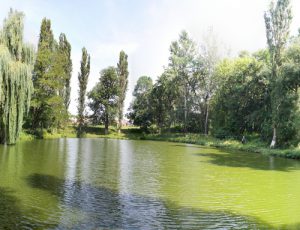 Dunayivtsy is a district center on the half-way from Khmelnytskiy to Kamyanets-Podilskiy. It was mentioned in chronicles for the first time in 15th century. It was quite a big village which had three local areas. The Gerburts, landlords owned that village and started handicraft trade there in 16th century.

In 1592 Dunayivtsy received Magdeburg Law with the help of Elizabeth Gerburt. Royal decree said,” Taking into consideration constant aggression of the Tartars and other enemies upon the lands of Podillya and having war-devastated and burned out areas we allow the widow of Halych chatelaine to rebuild the village of Dunayivtsy into a town and to call it Dunaygorod where all the inhabitants must be defended and protected.” Later Elizabeth remarried and in 1597 she gave her possession of Dunaygorod to her new husband. And since then Elizabeth and Mikhaylo Stanislavsky were the owners of the town.

In 1605 King Sigismund III of Poland confirmed Magdeburg Law for Dunaygorod and allowed to open workshops and hold three fairs a year. The magistrate signet was established and it had a crane with a stone in its claws as an emblem. The symbol of a crane in heraldry signifies vigilance, special attention and advertence. It stands sentinel and protects its flock from enemies. Modern emblem of Dunayivtsy copies the magistrate signet.

The development of the town was interrupted by the liberation war under the leadership of Bogdan Khmelnytsky in 1648-1657 and it was the time when the town was devastated almost totally. In 17th– 18th centuries Dunayivtsy changed it owners until it became the possession of Ian Krasynsky in 1782. He renewed the settlement and provided a background for the development of crafts and trade. He also invited German colonists to fulfill his plans. His wife Antonina and son Vincent were his adherents. In 20-30s years of 19th century they invited German families from Austria and Prussia who were specialists in woolen cloth manufacturing. In 1829 first woolen manufactory started its work and later there were two more of them.

Manufactory started by Krasynsky was continued by the Skybnevskies who possessed the town and neighboring villages in 1850. The golden age of industry was in 1870s when there were 54 woolen manufactories. There were also combing and dyeing plants, a soap and candle factory, a carriage workshop, a brewery and in 1875 they set up cast-iron plant. Dunayivtsy became one of the biggest industrial centers of the province and was famous as “Podillya’s Manchester”. The last owner of the town was Vasil Zavoiko who bought it from Bronislav Skybnevsky.

Two landlords’ mansions have left in Dunayivtsy in good condition. A country estate of the Krasynskies famous for being represented in Napoleon Orda’s sketch now is a place for local recreation center but the park which was around the building almost disappeared.

The former mansion of Zavoyko now is a hospital. It still has a back wing and a park around with a pond in it. The park has some very old trees like two-meter in diameter pine, three-meter tall ash, enormous linden, Norway maple and an old white acacia.