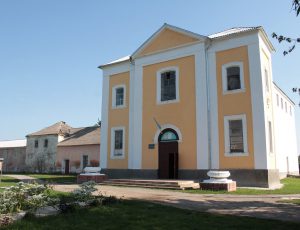 The village of Panivtsy is six kilometers away from Kamyanets-Podilskiy and it is situated in a picturesque valley of the Smotrich River. Its history had started in 15th century and the Cherminskies landlords owned it till 16th century when it became a possession of Ian Pototskiy. It was him who built a fortress on the cliff over the Smotrich and he became famous in Podillya at once but not for military events. The fortress was the place where Calvinists organized their religious educational center.

At the end of 16th century Calvinists and other Protestants were persecuted by Catholic  church and they were forced to search for a shelter in remote villages of Podillya and Volin which were possessions of Polish landlords. Ian Pototskiy was one of Protestantism supporters so he invited Calvinists to his palace. And there in Panivtsy’s castle in 1590 they founded an educational institute which they called an academy. The same year they set up a printing house and organized a kirk and a chapel.

When in 1611 Ian Pototskiy died his brothers who were Catholics ordered his widow to throw heretics out of Panivtsy. And then Jesuits from Kamyanets dismissed the academy, appropriated kirk’s possession, closed the printing house and ordered their monks to burn all the books in public on the central square of Kamyanets-Podilskiy. That is why books from Panivtsy’s printing house became rare objects and today there are only seven of those religious editions left.

The following years of the history of Panivtsy’s castle also have some interesting facts. It withstood a siege of Turkish army twice in 1621 and 1633. But in 1651 the Cossacks fought and captured the castle during the liberation war under the leadership of Bohdan Khmelnytsky. A Polish soldier helped the Cossacks open the castle’s gate in exchange of the military rank. But when they entered the territory of the castle they said they didn’t need the betrayer in their army and the soldier was hanged. After that the castle was damaged and robbed.

The castle was rebuilt in 1770s. At the beginning of 19th century the fortress changed its mission because a new village owner a landlord of Starzhinskiy reconstructed it for house holding needs. He added stables and the former kirk was changed into the cathedral.

Today there are ruins of two towers which were connected with a castle and they stand over the Smotrich. There has been also a basement of the castle. Its southern part has remained almost without any changes and today it has been used for needs of the village. The former academy is a home to a kindergarten and recreation center. Local authority occupies the former cathedral. House hold buildings and stables has been reconstructed into local school.

Besides historic monuments a village is well worth visiting. There you can find a waterfall and unfinished construction of the railway bridge in the form of huge piers which form a fantastic landscape together with the canyon.